OnePlus Nord will reportedly launch on 10 July in India; a teaser on Amazon also released - Android

OnePlus Nord will reportedly launch on 10 July in India; a teaser on Amazon also released - Android

«««««
»»»»»
OnePlus Nord will reportedly launch on 10 July in India; a teaser on Amazon also released

As per Amazon's OnePlus Nord dedicated website, more specifications about the smartphone will be revealed tomorrow (30 June).

According to a report by Android Central, OnePlus Nord will be launched on 10 July in India. The report also suggests that the smartphone is likely to feature a dual-camera setup on the front that houses a 32 MP primary sensor and an 8 MP wide-angle sensor.

The report mentions that OnePlus Nord may have three cameras on the rear. A 64 MP primary camera, a 16 MP (supposedly ultra-wide) lens, and a 2 MP shooter, which can either be a depth sensor or dedicated macro unit. It is expected to house a 4,300 mAh battery with the company's 30W Wrap charge.

To recall, OnePlus is also launching an affordable smart TV in India on 2 July. It will be priced under Rs 20,000. Qualcomm Snapdragon 865 Plus chipset is expected to launch next month

Infinix working on a new Snokor series, could be a smartphone 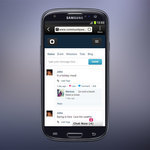 Spectacles 2, Spectacles 3 with inbuilt-camera by Snapchat launching in India on July 4